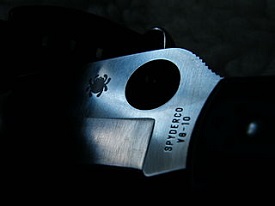 Spyderco makes some great knives, but which is the best Spyderco knife for self-defense? As we discussed here, it’s a very subjective discussion with lots to consider.

To recap some important points, a good self-defense knife should be:


Best Spyderco Knives for Self Defense

Spyderco makes some great EDC knives (Every Day Carry), so it was a tough job choosing the 5 we thought were the best.

Here are our thoughts and some further information on the ones we have chosen.

The Spyderco P’Kal has been called “The Best Defensive Knife” on the market today.

It was designed in a collaboration with Craig Douglas (a.k.a “South Narc”).

It was designed to be a “Last Resort” / “Self Defense” knife to be held in the “Pakal” / Icepick fighting grip (tip down blade facing towards the body).Certainly, if you examine the design further you can understand why it gets such praise.

The knife’s CPM S30V curves to a wicked point to be used for rapid thrusting, ripping and tearing. Another essential feature of a good self-defense folding knife is whether you can open it one-handed with either hand.

With the P’Kal you can. It incorporates Emerson’s “Wave” Opening feature and Spyderco’s own patented ball-bearing lock for safe and reliable deployment.

As you can see in the video below, using the knife is akin to boxing. The reason for this is Mr. Janich believes the “basic” way of using the knife should incorporate gross motor skills (those you have access to when adrenaline floods the nervous system).

If the opponent blocks, you can pull back to cut their arm re-attack (think “Sewing Machine”). Quick and efficient jabs to the face, neck, and eyes can also be used to end confrontations quickly or create range. All the while, a very sound body structure can be maintained to attack and defend from.

The P’Kal is also available as a trainer, which if you’re serious about self-defense you should consider. A trainer will allow you to practice fast and safe deployment and to pressure test scenarios and techniques. Learning is all about making mistakes, and a razor-sharp blade takes all the fun out of that…

Currently, the P’Kal is available on the Spyderco website for $305. That’s pretty steep for a mass-produced pocket knife.

It’s always worth comparing the price of the P’Kal on Amazon.

Another self-defense blade designed by Michael Janich, the Syperco Yojimbo 2 can be used in both regular and reverse / “ice pick” grip. It features a Wharncliffe-Style blade in a pocket knife.

Its 4oz weight (which is heavier than the longer Para Military 2) helps the Yojimbo deploy ultra-fast. Another key point for self defense purposes is the carry options the Yojimbo gives you.

The knife is also tabbed for all 4 pocket configurations – left / right / tip-up / tip-down. A lot of other knives don’t give you the option to customize your carry knife this way.

The Spyderco Yojimbo is designed for cutting, with Janich saying it possesses maximum cutting power in self-defense situations. This gives it the ability to cut through the muscles and tendons of the arms and legs.

Check out these Russian guys cutting through cloth and meat to see for yourself:

The CPM 30V blade is strong, sharp and thicker than other Spyderco models at around .140”. The blade’s length is 3” and change, so as always check with your State and Local laws about permissible carry. The Yojimbo 2’s G-10 handle has received excellent reviews for how well it says in the hand.

Away from self defense purposes, it’s cutting power makes it a superb utility blade for handyman and it’s been described as “The Box cutter from Hell!”.

The Spyderco Yojimbo is also available on Amazon, and you can find the price here.

The Street Beat is an amazing small sheath knife, designed by famous knife maker Fred Perrin (a retired French Commando and Martial Artist) to be used in any fighting grip. At just over 7″ it’s small, concealable and the Bolatron sheath allows it to be worn with a variety of clothing.

It has a VG10 full-tang steel blade is 3.5” long and has a razor sharp, full-flat grind. This knife is extremely well balanced due to its innovative design.

The smaller handle really allows the knife to be very responsive and fit comfortably in the hand. Fred Perrin has added a finger choil so the knife feels solid in the hand. The choil and the shorter handle length prevent the hand from choking up onto the blade when thrusting at full force. The handle design is further complemented by black micarta scales to really make it grippy.

The Street Beat comes with a Bolatron sheaf with G Clip fastening. The knife fits well and is very secure. I’ve rarely heard of any rattling from the knife.

There are 2 adjustable screws that let you carry the knife how you want. Vertically, inverted, horizontally, in forward cant and reverse cant are all good. From a self-defense perspective, it can ride over or under a shirt and be accessible with one hand. This is essential so it is in your hand quickly when you really need it.

There are a few review videos on Youtube such as this one:

Fred Perrin is more of a “custom knife maker” the knife will hold its value well. Looking around the web, people seem pretty pleased they spent the extra money for such a great knife.

On the Spyderco website the knife is listed at $279.95. You can compare this to the price on Amazon here.

The Spyderco Matriarch is a great defensive knife, particularly for someone who has not received any knife training. It is a scaled

down version of the popular “Spyderco Civilian” and as you can see, has a wicked “S” shape blade.

This knife is not designed for stabbing and thrusting forward. It is designed for downward slashing, hooking and pulling. The Matriarch’s tip can dig deep and rip into an attacker’s body like a claw.

These are the kind of defensive motions you would need to counter a knife attack. Most beginners with the blade are more likely to slash than stab.

Stabs cause more fatalities but:

a: You could be charged with murder
b. Stab victims have been known to fight on for several minutes before succumbing to their wounds.

An effective slash can sever vital muscles and tendons of the arm (called “Defanging the snake” in Filipino Martial Arts) and at the very least, give an attacker one less arm to use.

You can see some of the potential uses in this youtube video at around the 18 Minute mark.

An essential feature of a self-defense knife is that it can be in your hand quickly. The Spyderco Matriarch comes with the Emerson Wave feature so it can be good to go in less than a second.

As you’d expect from a Spyderco knife, it’s very well constructed. The 3.55” blade is from VG-10 Stainless Steel, it has a sturdy back-lock mechanism and can be clipped for left / right / tip-up / tip-down carry.

The only downside to the Matriarch is it looks intimidating! It is targeted towards self-defense so its use as a utility knife is limited.

You can find the latest price for the Spyderco Matriarch here.

The Spyderco Reverse was designed in 2015. The design was a collaboration between Michael Janich and Craig Douglas (a.k.a “South Narc”).
South Narc worked in the Military and undercover for many years; so brings a lot of real-world experience to the table. It’s a specialist knife for self-defense, designed to used in the “ice-pick” / reverse-grip.

This grip is favored by many as it incorporates the Gross Motor Skills and not “Fine Motor Skills” (a.k.a “Fancy). Tremendous force can be transferred to the tip of the blade.

As the name implies, you can switch the orientation of the handle to suit your personal taste. The knife comes with its own wrench, allowing easy removal and re-mounting of the scales. South Narc prefers the “P’Kal” style whilst Janich prefers “Edge Out”.

If you don’t know what suits you then the “Reverse” will allow you to experiment and find out. There is a great article that discusses grips here.

The knife features a 3.47”, CBTS BD1 Stainless Steel Blade and a G10 Handle. At a total length of just under 8” it’s light and concealable. Like the “Street Beat”, the knife comes with a Boltaron sheath with G-10 clip. It’ll be in your hand quickly, and you also don’t need to worry about dealing with an opening mechanism.

Here’s a video review of the Spyderco Reverse:

You can find the current price and more Spyderco Reverse reviews here.

So there we have it. Is the best Spyderco knife for self defense on our list? Or do you consider another Spyderco knife to be worthy of inclusion? Hit the comments section and let us know!

Be sure to check out our pages on 10 of the Best Self Defense Knives and The Best Knife Fighting Styles as many Spyderco knives pop up there.