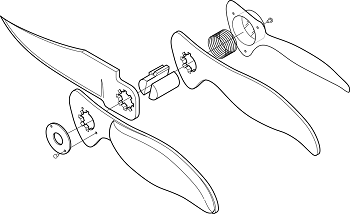 On this page, we take a look at some of the best pocket knife brands on the market in 2022.

The name “Spyderco” is synonymous with EDC pocket knives. Spyderco was founded by Sal Gleeson and his wife in the late 1970’s. The Gleesons used to travel to shows by a converted bread truck to sell their wares!

They introduced their first folder the “C 01 worker” in 1981. Gleeson is a pocket knife pioneer and developed pocket clips, serrations, and patented opening that became benchmarks for the entire industry.

From these humble beginnings, their product lines and success has grown exponentially. Spyderco use over 20 different steels with most (but not all) of their products sourced from Taiwan.

A quick word on Taiwanese steel. Quite often the uninformed lump steel from Taiwan in which steel from China. The fact is blades made in Taichung, Taiwan are completely different to those made in China.

The reason for this is the degree of specialization within the heat treatment process. In China, they perform the entire manufacturing process in one factory. In Taichung, the heat treatment is still being down separately by factories that have over 30 years experience. They coordinate with the other factories to produce the finished product. Quality standards are also generally accepted to be higher in Taiwan than in China, too.

Check out our page on The Best Spyderco Knives.

Buck Knives are an American institution. If your father ( or even Grandfather) had a pocket knife that lasted long enough for him to pass it on – chances are it was made by Buck.

The company traces its roots back to 1902 when a young blacksmith’s apprentice named Hoyt Buck made his first knives. At just 13 years old he developed a unique heat treatment process. The process significantly extended the edge retention of stainless steel blades.

During WW11.  Hoyt Buck became aware of a shortage of knives among G.I.’s and quickly set up a knife shop in his church’s basement to do his part.  After the war, he took the equipment and volunteers he had amassed and began producing knives commercially.

In 1949 his son, Al Buck, took over operations and began expanding. Throughout the 1950s and 1960s, Buck Knives became one of the world’s most prolific knife makers. It was during this period that the famous Buck 110 and 112 knives first made their appearance. They quickly became cultural icons and their ownership a de-facto right-of-passage for many Americans.

Most of the Buck brand are made in the U.S.A and they offer an industry-leading “Forever Lifetime Warranty”

Check out our page “The 5 Best Buck Knives”

Cold Steel illicit a “Love ’em or Hate ’em” reaction from many knife aficionados. Granted, they do have a lot of “Mall Ninja” crap (possibly made worse with an affiliation with Steven Seagal). They also have some great knives at some great prices.

Cold Steel was established in the 1980s. Since that time they have brought some great designs to market. Certainly, if you’re looking for a decent tanto blade or kukri at a reasonable price, they can accommodate you.

They also have developed the Tri-ad lock system. Many believe that this is one of the best folding locks on the market today.

Like Spyderco, they do outsource some of their manufacturing to Taiwan. They also use China for their “Budget Blades” and the USA for more higher-end stuff.

It’s fair to say that it’s pretty much a mixed bag with Cold Steel. However, providing you do your research you can find some really great value with them.

Check out our page: The Best Coldsteel Knives

Benchmade are another premier pocket knife manufacturer, based out of Oregon. They’ve been making knives for over 25 years and their products are popular with the Military, Law enforcement and survivalists alike. They have a great range from $30 all the way up to $600+ for some of their higher-end designs.

Benchmade also have a range of great steels including CPM – M4, CPM – S90V and even some Damascus steel. What really helps set them apart from other knife brands is their exclusive “AXIS Lock”. Many consider this one of the best locks on the market for an EDQ folder as its strong, reliable and ambidextrous.

Another area Benchmade excel in is customer service. Not only do they offer a “Lifetime Warranty”, but they also offer “Lifesharp”. This lets you ship your blade to them and they’ll sharpen it and give it a “tune-up” at the same time. Not only is this service free but they’ll also send it back to you for free, too.

Boker is a very respectable knife brand that has manufactured blades in Solingen, Germany since 1869. They have designs at various price points. Different lines of the Boker brand are made in different places.

Boker knives originally began life in the USA as “H. Boecker & Co” in the early 19th Century. The Boecker family had been making tools and sabers in Germany. They expanded to America, Canada, and South America.

The American brand has seen some changes of ownership down the years. In 1968, “Boker USA inc” was formed in Denver Colorado. Their premier  “Boker Tree Brand” is still made in Germany. Many of the “Boker Plus” and budget “Magnum by Boker” are made in Taiwan & China.

CRKT in an American Company that was founded in Oregon in 1994. They have some really great, affordable designs made from mid-grade steel. If you’re looking for decent quality around the $50 mark, you’ll find it at CRKT.

od example of  what to expect from CRKT is with Kit’s Carson “M16” line. There are quite a few different styles of blades to choose from. Most are made of decent Aus – 8 steel and given heat-treatment to 57 – 59 HRC. You also have the choice of G10 or Glass Filled Nylon handles which for the price is excellent.

As with all budget knife brands, you really need to check what you’re getting. CRKT also use Chinese steel such as 8cr13mov.

CRKT also have some great “Minimalist” neck knives, too.

Zero Tolerance are a series of knives manufactured by Kershaw. I thought it’d be wise to split them out as “ZT” is now a knife brand in it’s own right.

The marketing goes that Kershaw primarily offers Zero Tolerance knives to Military & Law Enforcement.  Now, you might not put a lot of stock in that but it shows they are all about EDC. Not camping. Or bushcraft. Or cutting boxes. So you can be sure if you want a  high-quality EDQ knife – ZT can provide it!

With a ZT knife, you’re practically guaranteed great steel and a lock you can rely on. You need only look at the ZT 0456 with its CTS-204P steel, titanium frame lock and handles as an example of this. Many of their designs such as the ZT 0450CF and ZT  0095BW use S35 VN which is also a “Super Steel”.

Naturally, you have to work out if around $200 is “value” for a pocket knife. Some users also find them to be “too much knife”. It’s true their a bit beefier than other brands than Spyderco.

Still, a lot of people would rather EDQ something that is perhaps over-engineered than under-reliable.

Kershaw is an American knife company that produces the aforementioned “Zero Tolerance” line. They do a really good job of hitting numerous price points with their knife catalog. Kershaw are often mentioned as being the “Best Value EDC” brand.

In common with many knife brands, Kershaw splits its production between the USA and Asia.

You can find some high-quality steels being used at Kershaw such as Sandvik 14C28N, s30v & Elmax. If you’re looking for an assisted opening knife (and this is a great option for an EDC knife) Kershaw have many different designs to tempt your fancy.

Their customer service and warranty is also second-to-none. Kershaw will sharpen your blade for free as long as you send it to them (or call in person). They will even replace broken blades for just $10!

Check out our page: 7 of the Best Kershaw Pocket Knives

Schrade is an old-time knife brand that’s coming back from the dead. They now cater to those on a shoe-string knife budget.

It wasn’t always like this. They used to produce “Legacy Knives” and use some really nice high-carbon steel. The “Old Timer Trailblazer” was made from 1095 for example and many boy scouts remember “Imperial Pocket Knives”.

After hitting financial difficulty they were bought out by the Taylor Brand (who also acquired Smith & Wesson) around 2004. They now source their steel from China and Taiwan, with some designs still made in the USA.

Taylor Brand claim to keep a tight reign on the quality from China. On some knives they do use decent steels like Aus-8 and 440c. However, a lot of their knives are made from Chinese 8cr13MoV so you need to do your research.

Still, if you’re looking for something a fraction the cost of others on this list – check them out.

SOG are another knife brand who target the “Mid Range” market. Having said that, they do outfit some of their designs with high-performance Sv30, San-Mai & VG10 steels.  They also have the “Arc-Lock” which facilitates one-handed opening – a vital characteristic for the best EDC blades.

A few years ago they were acquired by a private equity firm. Since then, more of their designs have started to be made in Taiwan & China. You can still find some SOG Folders that are made in Japan, but expect these to be priced higher.

SOG were one of the first to put pencil sharpeners and levels on their pocket knives. They also use a really nice, low-riding pocket clip that helps not to scare co-workers / snowflakes. Their fixed blades and multi-tools receive a fair amount of praise, too.