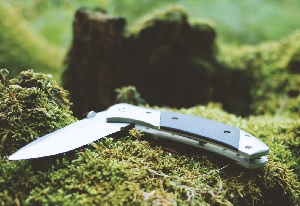 When heading out into the great outdoors, a pocket knife (or several!) is an essential tool.

Pocket folders can take care of many camp and field tasks such as whittling, preparing food, and cutting rope. They’re also nice to have when you’re alone in the middle of nowhere (a gun is also handy, too!).

On this page, we’ll pick out five of the best folding knives for camping. We’ll also discuss the features you should look out for when choosing a camping folder.

3 Things Your Camping Folder Should Have

In theory, just about any pocket folder that’s well enough constructed can undertake most camping tasks. But in practice, there are some major real-world differences between folding pocket knives, even at the lower end of the spectrum.

Here are three things to pay special attention too when buying any folding knife for camping.

One of the more important things to look for is how well the blade locks in place. Blades without a positive locking mechanism can dislodge with surprising ease.

Getting a nasty gash to your fingers or hand when you’re tens of miles into the wilderness isn’t just painful; it’s potentially life-threatening.

Most of the knives we review here have patented liner locking mechanisms that are tested to withstand huge forces and remain in the locked position.

Another important feature is grip. For many people, about the most adverse grip conditions they’ll ever encounter are a little grease on the fingers. Because of that it’s easy to overlook the supreme importance grip plays when the chips are down.

In the wild, your knife may be the only thing you have to ward off attack from an aggressive animal or build a shelter in a sudden storm.

A knife with substandard grip capability can prove completely useless in such scenarios.

It’s not difficult to sharpen a pocket knife – if you’re safely at home in the garage with all your tools.

When you’re trying to get a tent up in the rain and clear away some brush, the last thing you want is a dull blade.Make sure you pick a decent (or as decent as you can afford).

In budget knives, 440 HC and AUS-8 is generally better than some of the ones coming out of China…You’ll also need to pay attention to the heat treatment, too. If the HT is for crap, it can ruin the best steel.

And overheating can make it brittle and bits can chip off which is no bueno.Look for knife brands who have a track record for staying with the same steel and heat treatment facilities – like Spyderco and Aus-8 for example.

​The Swede 92 is a design that’s been around for decades and has been used by military and outdoorsmen for millions of man-hours.

The Swede 92 has a hollow grind blade all the way to the handle. The blade is made of Sandvik 12C27 steel with an HRC rating of 58, making it both tough and hard.

The blade  securely locks out and  unintentional release is impossible even under heavy forces. Which is great if you’re giving the folder to one of your children.

The handle is a beautiful polished Bubinga wood that is contoured to the hand and grips very well. The handle is large at approximately 4.84”. The knife’s total open length is 8.27” and the blade is 3.43”, making it well within legal parameters in most states.

It’s a manually opening folder so you won’t run afoul of any crazy, misguided knife laws. After all, we know knives and guns have a tendency not to behave themselves in certain, ahem, areas.

There are some complaints online that the handle is not Birch. Some people think that for the price they’re paying that Birch is an upgrade on Bubinga. However, you can often get a really good deal on this knife.

Overall, the Swede 92 is a time-worn, proven design that’s the first choice of military personnel and serious woodsmen the world over.It makes a great folding knife for camping.

The Opinel No. 13 blurs the line between machete and pocket folder.

The sword-like 22cm blade is equally suited to whittling or chopping down small trees. While not explicitly designed as a bushcraft knife, it will serve in that role capably.

The clip-point blade is well suited to penetration tasks and the 12C27 stainless steel is plenty tough. You can expect this blade to absorb huge forces without cracking or chipping.

It also holds an edge quite nicely and has an HRC of about 58. These combined properties make Sandvik’s 12C27 one of the better cutlery steels.

The handle is made of visually pleasing Beech wood and is nicely contoured to promote a firm grip. The knife also features Opinel’s patented and proven locking mechanism.

Even while being pounded against hard surfaces when held upside down the blade will not spontaneously unlock.

The only drawback one might cite is the knife’s gargantuan proportions. However far from being a conjured up set piece from a tall-tale, the #13 turns out to be a consummately practical deep woods tool.

Its ability to nicely bridge the gap between agile pocket folder and brute-force bushcraft batoner makes it something you can rely on out in the back and beyond. If you don’t might something a bit lot bigger than you’re average pocket knife, this is for you!

If you’re looking for a no-frills, low-cost EDC or camping knife, the Ganzo G7413 is among the best of its kind.

The drop-point blade is made from American 440C steel. It’s both relatively hard and tough and can easily be honed.

The blade has a robust locking mechanism that ensures it will never leave the locked position unless the user unlocks it first. The blade length is 3.5”, making it legal within most U.S. jurisdictions.

The handle is G10 and is both scaled and contoured, making for a very sure grip. The total open length of the knife is 8.1” and about 4.6” of that is the handle.

This large handle size means even those with larger hands will be able to comfortably wield this knife from any angle with either hand.

It’s also easily portable. It comes with a reversible pocket clip and also has a lanyard on which the whistle is attached. The total weight comes in at about 4.55 oz. That’s a little heavy for a knife of this size but it is still very easily manageable for every day carry.

Perhaps the most unique aspect of this knife is that it comes with a whistle. While it may or may not scare off aggressive animals in the wild, it will certainly give prowling muggers second thoughts about victimizing the knife’s owner. It’s also great in case you get lost out in the woods.

All said, the Ganzo G7413 is a great bargain with some useful and unique features. For anyone looking for a first pocket folder or a dedicated EDC or camping knife, the Ganzo is a great option.

Everyone wants the perfect folding knife at an entry-level price point. Well, the Ontario RAT II may not be perfect, but it’s pretty darn close.

The Aus-8 stainless steel is both relatively hard and extremely tough, making this a great EDC, all-purpose tool. The RAT II will cut straight through PVC, penetrate hard wood and even tolerate use as a wedge without chipping, snapping or destroying internal components.

The blade glides open with ease yet has no side play. And the combination of the stainless blade and sleek nylon handle give it an appearance of high craftsmanship usually only seen in much pricier knives.

With a  textured nylon handle, there is ample gripping room and makes the RAT II a high-utility, multi-role tool. The straight back blade is 2.9”, long enough to complete most outdoor tasks yet short enough to be legal almost anywhere.

The handle also contains an open liner lock system. This ensures the knife will never spontaneously close even if strong forces are applied to the spine while open.

Another nice feature is the 4-way, reversible pocket clip. This gives maximum flexibility in how the knife is carried. It’s thin enough that, with the versatile pocket clip, the knife can be adequately concealed under nearly any piece of clothing.

The only real drawback is that it’s made in Taiwan. It’s almost perfect, but not quite. Still, quite a few reputable brands are being made in Taiwan now, and generally speaking the quality is far superior to China (largely due to the heat treatment process).

For frequent campers in need of a high performance tool, hardworking people that need a good EDC or even someone who needs a self-defense knife, the RAT II is a cut above the competition.

Want a pocket folder up to any outdoors task that looks good enough for a display case? Then check out the Gerber Gator Folding Knife.

Its 420HC stainless steel clip point blade has the hardness for edge retention and the toughness for serious abuse. The clip point is designed for penetration and hard strikes without snapping or chipping.

At 3.6”, the blade is plenty long enough to complete most cutting tasks while still being short enough for legal carry in most U.S. states. And the knife features Gerber’s patented locking mechanism that ensures the blade will never spontaneously move while locked.

One of the Gator’s most endearing features is its namesake handle. The synthetic gator skin handle is second to none in gripping power. Combined with the contoured handle shape and large finger choil this is a blade that won’t slide from your grasp though snow, rain or blood.

The Gator comes with a ballistic nylon sheath for both storage and carrying. Many inveterate knife owners are wary of nylon as a sheath material, and not without cause. But realize that Gerber’s been in this game a long time and knows their stuff. This sheath won’t look moth-eaten after a week of hard use.

The 8 oz size is a little heavy for this type of knife but the knife’s dimensions are also a little larger. It’s still perfectly comfortable to carry all day long. It’s also worth emphasizing that this knife has an exquisite, high-end quality in both look and feel that you just don’t see at this price point.

Some may balk at the slightly higher price versus that of some putative competitors. However the Gerber Gator is really in a class above entry-level folders.

This is a rugged, lasting knife meant to be used hard every day, look good doing it. The Gerber Gator is worth every cent.